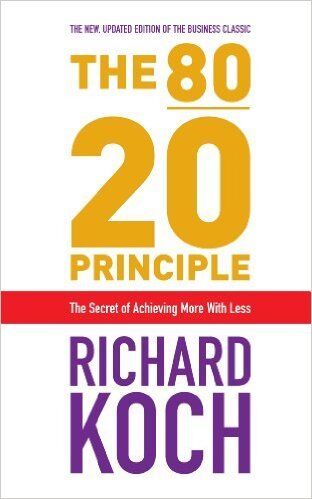 Would you like to learn how to get more done with less effort, eliminate wasteful activities?
The 80/20 Principle, or Pareto Principle, or the Law of the Critical Few, has been described in all sorts of ways by many different people, but the central idea is the same: a few things are responsible for most of the results.

This is the basis of Koch’s book The 80/20 Principle: The Secret to Achieving More with Less

Here some of the big ideas from The 80/20 Principle…

1: A majority of outputs come from a minority of inputs.

Think about how often you wear the clothes you own, it’s very likely that about say 20% that you wear a lot. Of the contacts in your address book or on your phone, it’s also likely that you deal mostly with say 20% of them.

2: A majority of results comes from a minority of efforts.

Think of everything you’ve accomplished in your career and it’s very likely that the skills you need to do your job well are a small fraction of what you know and what you can do well, but they produce the majority of your income.

Even the projects you’re working on follow the same principle: the vast majority of the output or value of any project lies in just a few critically important tasks. The rest of the tasks involved don’t matter nearly as much to the end result.

3: The Critical Few – identify and build upon the 20% of efforts that produce 80% of the results.

If you want to improve your effectiveness at anything, focus only on what matters most. It doesn’t matter if you’re working on a project, or strengthening a personal relationship. There are a few things that matter a lot, and much that doesn’t matter at all. If you identify what matters most you will spend less time, less money, and less effort – and get better results at the same time.

4: Most of what we do is low value – eliminate or reduce the 80% of efforts that produce poor results.

You only have so much energy and time, so it pays to use it wisely. If something is only marginally useful, delegate or delete it. If it’s largely a waste of time to answer every last e-mail or tie up every loose end, that doesn’t mean you won’t experience repercussions from skipping them. By making some hard decisions about what to focus on and what to delete, you’ll free up huge amounts of productive time and energy to focus on what will really get you where you want to go.

5: A minority of decisions will produce the majority of your results: choice of work, investments, relationships.

There are a few specific decisions it pays to take special care before making: what you do for a living, borrowing money, contractual commitments, and who you spend the most time with. Think of these decisions as inflection points – you’re making a commitment that’s very difficult (not impossible, but difficult) to reverse or change. They also effect how you will be spending your time and energy on a very fundamental level, such that they can drastically alter your income, priorities and satisfaction. It pays to spend a large amount of time and energy making sure these decisions are made well, and you put yourself in the best position you can in the process.

6: In life, focus on the activities that produce the majority of satisfaction.

A few things will contribute the most to your overall happiness. Those are the things that you should build your life around: spending time with family and friends, having deep conversations with people, sharing what you know with others, and doing fun things. A wide body of research indicates that daily experiences contribute far more to your overall happiness and life satisfaction than possessions do.

Here’s the ultimate lesson: you are not rewarded for effort. People don’t care how long you spend doing something – it is far more about how important and meaningful what you do is.

For more information about Richard Koch’s work, check out http://www.the8020principle.com/