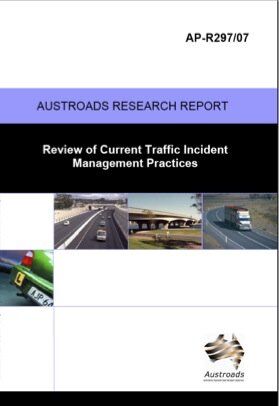 To identify potential innovative practices that may be suitable for wider application, as well as provide a benchmark for ongoing improvement, a review of current traffic incident management (TIM) practices in major urban regions across Australia was undertaken in 2005-6. The review covered current traffic incident management practices in Sydney, Melbourne, Brisbane, Adelaide and Perth. 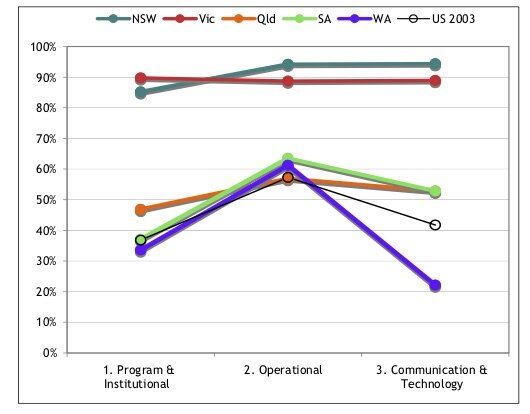 A summary of the results show the highest assessments were recorded in Sydney and Melbourne, which are also the cities with the highest levels of traffic, congestion and incidents.The highest rating was for operational aspects, which were significantly higher than communication and technology or program and institutional issues.

Program and Institutional Strengths
TIM is a key or emerging priority in most agencies surveyed, formal interagency agreements on roles, operational and administrative procedures and policies are in place in a number of jurisdictions and cooperation is facilitated in some jurisdictions by legislation.

Handling TIM for special events is well established with high profile special events, such as the Sydney Olympics in 2000 and Commonwealth Games in 2006 in Melbourne, providing a catalyst.

Private toll roads in Sydney and Melbourne are required by their concession agreements to provide incident response services, nevertheless TIM is considered a core business activity as it provides a competitive advantage to attract patronage. 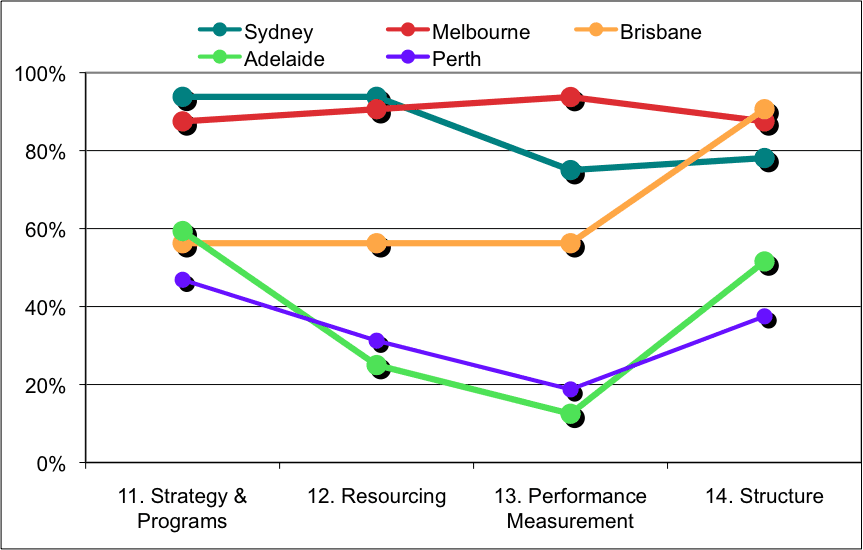 Program and Institutional Challenges
Funding issues raise a major obstacle to effective TIM in most jurisdictions.

The number of stakeholders involved in planning, policy and operational is limited to a few key responders, usually the state road and traffic and police agencies.

Few TIM performance measures and targets have been formally established and are being tracked.

Operational Strengths
Overall there is a good level of understanding between responders, particularly police agencies for emergency and safety requirements and the road and traffic agencies for traffic management and clearance.

Most cities have dedicated incident response services, although they have limited coverage of the high traffic network due to resourcing constraints. Incident response crews, for example used in Brisbane, Sydney, Perth, undertake initial response and access further equipment and materials from depots or call up salvage or towing contractors as required. Road maintenance crews or contractors are generally used for major incidents.

In some cities, as part of inter-agency agreements, the responsibility for site and traffic management have been clearly delineated, with the police agency being responsible for the inner cordon immediately around an incident and the road and traffic agency being responsible for the outer cordon, controlling traffic and providing information on traffic conditions, but still under the overall control of the incident commander (police).

There are generally well-established procedures for fatal crash investigation by Police and hazardous material response.

Pre-qualified lists of towing and salvage operators are generally available for clearance of incidents, however there are often issues obtaining suitable heavy towing or specialist clearance equipment, due to limited availability of these units. 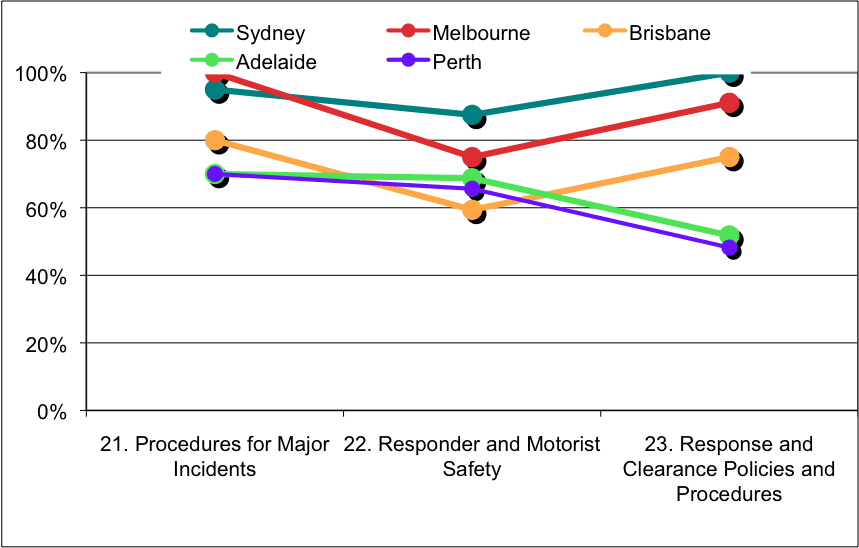 Operational Challenges
Agencies generally have established criteria for major incidents – but these are not agreed across all responder agencies, making rapid, appropriate responses difficult.

Staging of vehicles at incident scenes is a challenge in all jurisdictions as there is still a tendency to unnecessarily block lanes by emergency services (fire and rescue particularly), primarily for responder safety. Limited training and understanding of positive traffic control by emergency services personnel may contribute to this problem.

Greater emphasis on incident management is needed in traffic management for roadworks.
Long response times by road maintenance operators and contractors needs to be addressed by either resourcing improved service levels or providing alternative response resources.

Communication and Technology Strengths
Traffic management centres are in use in all cities and are able to provide a very effective coordination role, utilising traffic system and intelligent transport systems information, including video from CCTV cameras.

Communications is currently handled well in Sydney, Melbourne and Adelaide through shared systems with emergency services. The Sydney TMC is the only one with police agency personnel, which results in good inter-agency communications.

Data and video information is being transferred between agencies in some cities, primarily between the road and traffic agency and police, to assist in deploying an appropriate response.

Most road and traffic agencies have developed or are developing policies and procedures for traffic management during major incidents, particularly diversion plans and altered signal timings. 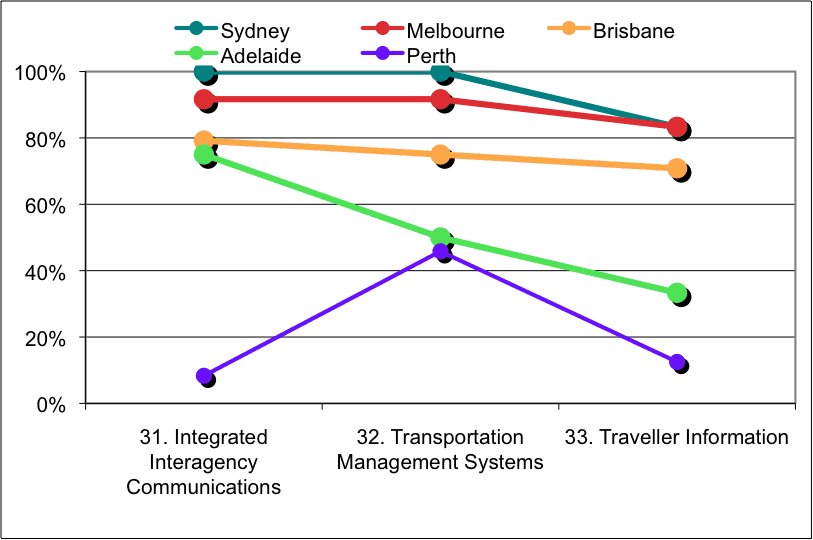 Communication and Technology Challenges
Communications between incident responders are not well handled in most areas, requiring relaying of messages through a central control centre, or a series of centres and use of mobile phones as a primary means of communication.

While there are initiatives in providing traveller information, such as regularly update recorded messages on telephone hotlines and internet websites, there is limited real-time traffic incident-specific information available. Only Melbourne and Perth provide motorists with travel time estimates for some key route segments.

Intelligent transport systems coverage of the major traffic network in most cities is still limited and further resourcing is required to enable a reasonable level of coverage of the high traffic network. Limited use is made of traffic management systems for automatic incident detection and congestion alarms, as well as automated incident response protocols and decision support systems. The network of variable message signs has limited deployment across the city networks, resulting in limited opportunities to provide traveller information.

Available technology applications that can speed response and quicker clearance of incidents, such as photogrammetry and digital photographs for crash investigation is not being utilised and most areas still have challenges in sharing data on despatch of police response units, providing traffic information etc.